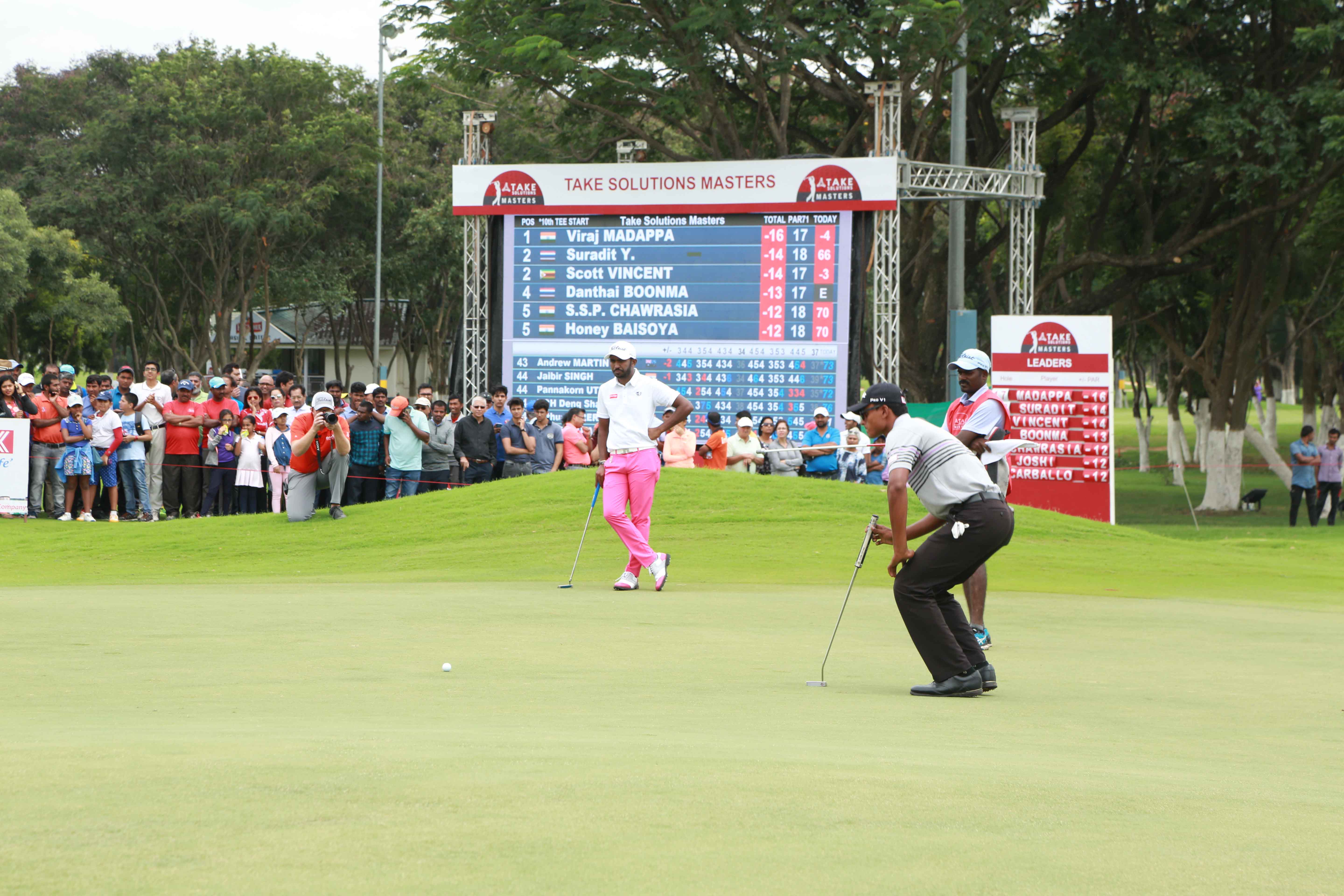 Bengaluru, August 21: Viraj Madappa opened a whole lot of doors for himself with a magnificent win at the second edition of the TAKE Solutions Masters tournament last Sunday. The 20-year-old who came back from a US University, where he had gone to combine golf with academic study, took just one semester to realise what was his real calling.

Receiving the crystal studded trophy from Mr. Srinivasan H R, Vice Chairman and Managing Director of TAKE Solutions, Madappa took the first step in what could be a fine career from here on.

Madappa came back and shifted his base from Kolkata to Bengaluru, which is now the hub for Indian golf and started training with former Indian Tour pro, Tarun Sardesai. That was last year and within a year, Madappa had broken through for his maiden win ahead of his senior colleagues, S Chikkarangappa and Khalin Joshi, with a masterly display that also earned him US $ 63,000 besides an exemption on the Asian Tour until the end of 2019. He has also moved to 40th on the Habitat for Humanity Asian Tour Order of Merit.

Opening the week with a modest 1-under 70, he blazed the KGA course for the next three days with rounds of 65-66-67 for a 16-under par 268 which was two shots better than the four stars tied for second place, the Thai duo Danthai Boonma and Suradit Yongcharoenchai, Zimbabwean Scott Vincent and Argentine Miguel Carballo, all of whom were two behind at 14-under 270.

Madappa is the first Asian Tour rookie to win in 2018 and he is also the youngest Indian winner on the Asian Tour at the age of 20.

“I worked really hard with my coach (Tarun Sardesai) and my whole team, just to keep myself going. I am very happy that I did all the work I could to win. The efforts have definitely paid off now,” said Madappa.

“It’s incredible really. My family has been very supportive and my mum was with me. It was also great to see all the kids from the TSG Academy. They were all between six and fifteen years’ old. They were probably the loudest in the crowd. I was riding off their energy,” said Madappa, who will soon work on his schedule for the rest of the season.

There are at least 10 events for which he will be exempt this season and he will get an automatic berth into all events – full field Asian Tour events and also those co-sanctioned with Europe and Japan.

“That will give me a lot of choices,” said Madappa.