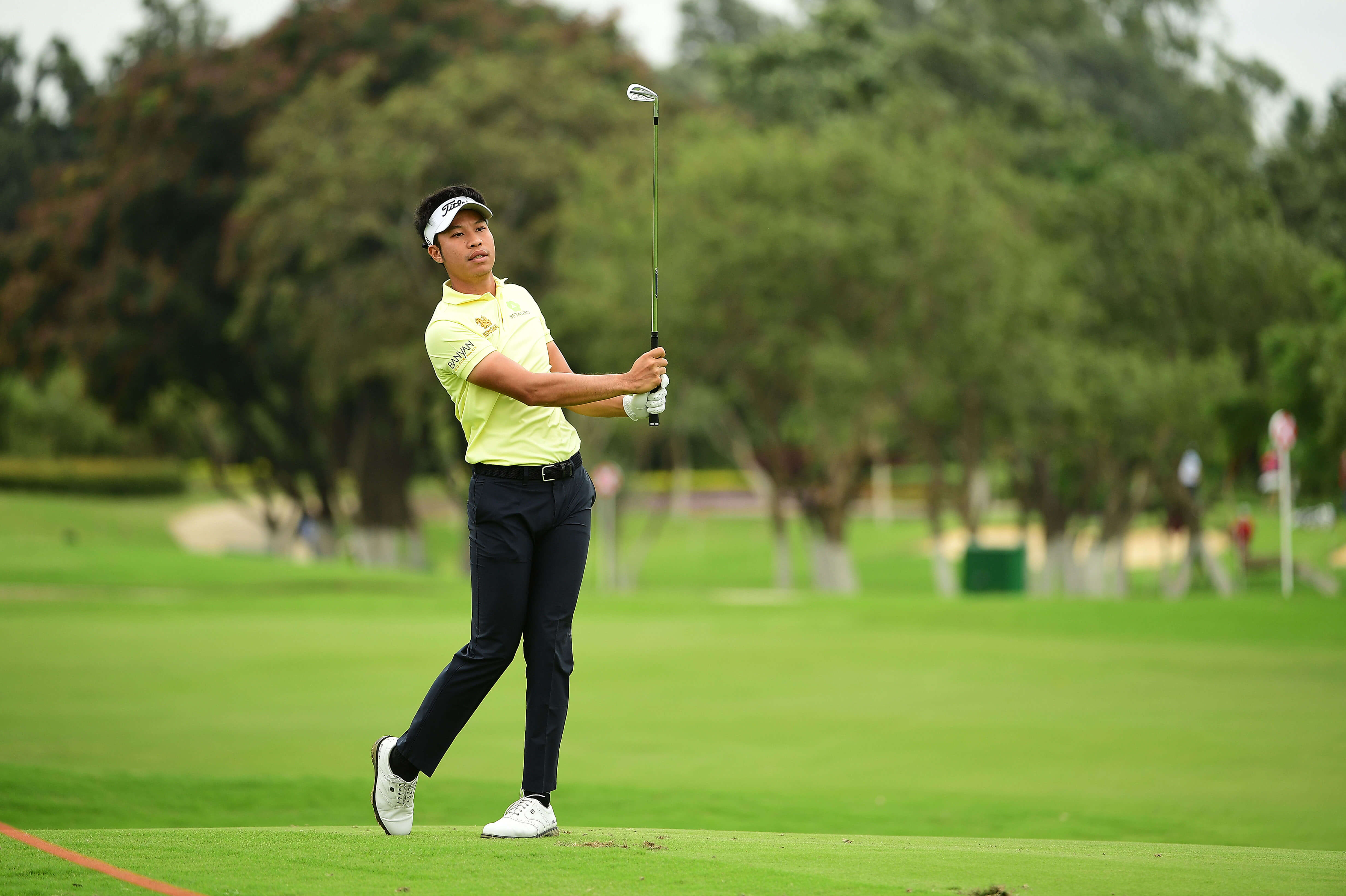 Bengaluru, August 10: Thailand’s Danthai Boonma went on a birdie spree as he slotted birdies in each of his first seven holes to blaze through the second round in 10-under 61 at the TAKE Solutions Masters at the KGA Course on Friday. At 15-under, Danthai is now five shots ahead of second placed Argentine Miguel Carballo (66-66) and Maverick Antcliff (67-65) who are at 10-under.

The 22-year-old Danthai, who had a flawless 5-under 66, stayed bogey free for the second straight day. Danthai revealed, “I forgot my Buddhist pendant necklace this morning. It’s like my lucky charm so I went back to the hotel to take just 20 minutes before my tee time this morning. Thankfully the hotel is just next to the course.”

He added, “I’ve been singing this Thai song in my head and I want to continue that tomorrow. It helps calm me down. I will keep smiling and keep it fun out there.”

There were five Indians in the Top-10 with S Chikkarangappa (4th) and SSP Chawrasia (5th) being the leading ones. Viraj Madappa is T-6th sixth while Khalin Joshi and Honey Baisoya are Tied-9th.

Danthai’s sensational 10-under 61 equalled the lowest score in relation to par, but with preferred lies. Khalin Joshi, as an amateur shot 10-under with par for the course being 72 in 2012.

Five shots behind the 22-year-old leader is 39-year-old Carballo, who after playing on European, Web and PGA Tours has now come to experience Asia, while playing in the region. Carballo was also bogey-free for the day with a second successive 5-under 66 to get to 10-under 132.

Australian Maverick Antcliff (65) birdied the last hole and joined Carballo at 10-under in Tied-second place.

Chikka, highly successful as an amateur at the KGA Golf Course, turned on the magic once again to card 7-under 64 to rise closer to the top at T-3rd on the leaderboard. Chikka, who had a touch of cold on the first day, had eight birdies against one bogey to get to 9-under 133 but six shots behind the leader, Danthai.

While Chikka gave locals a lot to cheer in the afternoon, the morning belonged to one India’s most popular stars, SSP Chawrasia (65) who shot a bogey-free 7-under 65 in perfect conditions to get to 8-under 134 and fifth.

Friday saw a barrage of birdies but none had more than Danthai, the bronze medallist at Youth Olympics in 2014 and also a team bronze medallist at 2014 Asian Games. On Friday, he began with seven birdies and then added three more on 11th, 13th and 14th. He was thrilled with his round, saying, “It’s amazing. It’s my personal best, my first time shooting 10-under-par in my life.”

He added, “Thammanoon’s five straight birdies yesterday came to my mind this morning but I thought I should just focus on my game. I tried not to think so much out there already, especially after that seven straight birdies.”

Danthai added, “It’s pretty windy today. Good that I had the experience of playing against the wind at The Open earlier. But obviously the windy conditions here can’t be compared to what it was at Carnoustie.“

Chawrasia has been a little distracted with the illness of his mother back in Kolkata. His 6-under 65 took him to 8-under 134 and he said, “I had a good round yesterday as well, but today was better as I played bogey free. I hit quite a few long putts, and I am using the new putter for the first time this week. It seems to be working well. I putted well and I also had a 50-footer birdie putt from outside the green.”

On his mother’s health, he said,. “The news is better, so that helped me focus more on the golf. Yes, during the off-time and break between the shots, I was thinking about her but I didn’t let it affect my game.”

Carballo, who came over to Asia this year to get a different experience after spending many years on the US and Web Tours, said, “Going to different countries to play different tournaments and meet new people, I think I am very lucky. I am enjoying myself here. My focus now is to play on the Asian Tour.”

Chikka, who has a very good track record at KGA, said, “I love the KGA and have played very well here. I have lost only two events at the KGA. One was the TAKE Solutions Masters last year and the other was when Khalin Joshi shot 10-under-par in an amateur tournament in 2012. Those are the only two I have lost here.”

On the second round, he said, “I started good. I have actually not been feeling well, yesterday I had some cold and a bad throat. Luckily I had a morning tee off yesterday, and then I had a lot of time to recover, so I did that. Today the body was feeling great.”

The 20-year-old Viraj Madappa, who has shifted his base to Bangalore compiled a superb 6-under 65 to get to 7-under 135 and is Tied-6th alongside 19-year-old Thai Suradit Yongcharoenchai and Mathew Killen of England.